Today, I’m very pleased to share some great news: our first major Gamewheel 2 collaboration, which we have been working on over the last few months. As announced by AppLift today, Gamewheel 2 is going to power up AppLift’s new studio offering to deliver Premium Playable Ads. It’s a big success for our team who believes in the power of gamified storytelling in every marketing goal from branding to performance.

With this step we’re also extending our offering on the mission to become the leading Playable ads platform through integration with the AppLift’s mobile DSP DataLift 360. AppLift’s DSP offers programmatic access to over 65 billion monthly unique impressions compatible with MRAID2 Playables standard, which could total at 90 million monthly hours of play time for Playables (assuming 5 seconds average play time per session). With Gamewheel 2 we’re now offering brands a new access to this most lean forward mobile medium, where American adults already spend the majority (89% according to eMarketer) of their media time per day.

Now, it’s a good moment to reflect over the past and share the story how we actually arrived at this point of the startup rollercoaster.

The dawn: how we pivoted to Playable Ads content creation

As we started the Gamewheel journey in 2014, I was actually pretty new to the advertising industry. While going through the Seedcamp accelerator we decided to pivot from being an AR mobile game studio to a B2B games solution, as we believed that it’s a much more scalable business with appearance of the new MRAD2 format. Thus, we all read a lot about the ad industry concepts and we kind of stuck with this 3-step funnel approach, we thought was really clear and easy to grasp.

First you do 1) branding, then 2) content marketing and then 3) performance:

Seems logical, that if you want to create a scalable online product you cannot go directly to branding first, as you always will need unique and expensive content and it’s super hard to acquire such clients having branding budgets as a small B2B startup. On the performance side, games and gamification seemed to be kind of an overkill to think about. So we decided – we have to focus on content marketing. So we did!

And this is where first challenge began

Content marketing is a strategic marketing approach focused on creating and distributing valuable, relevant, and consistent content to attract and retain a clearly-defined audience — and, ultimately, to drive profitable customer action. (CMI)

No, wait a moment – is this not kind of a generic definition of marketing in general? We had a really hard time figuring this out, so the only startup solution to this is: build new things and fail fast.

How we got our first success with Burger King©

At the end we were a bit lucky. The creative agency of Burger King© discovered our tool directly after its launch. They totally understood what we meant with end-to-end storytelling. Burger King© marketing is split into roughly 6 main campaigns over the year so we just jumped on implementing the first Playable Ad in 2016 and consequently adding Playable Ads to each 6 campaigns total (as covered later by Think with Google).

And due to “the law of shitty click-throughs” – we won! Because we were trying this approach with Playable Ads as one of the first non-gaming brands on mobile and this is how our average CTR looked like: 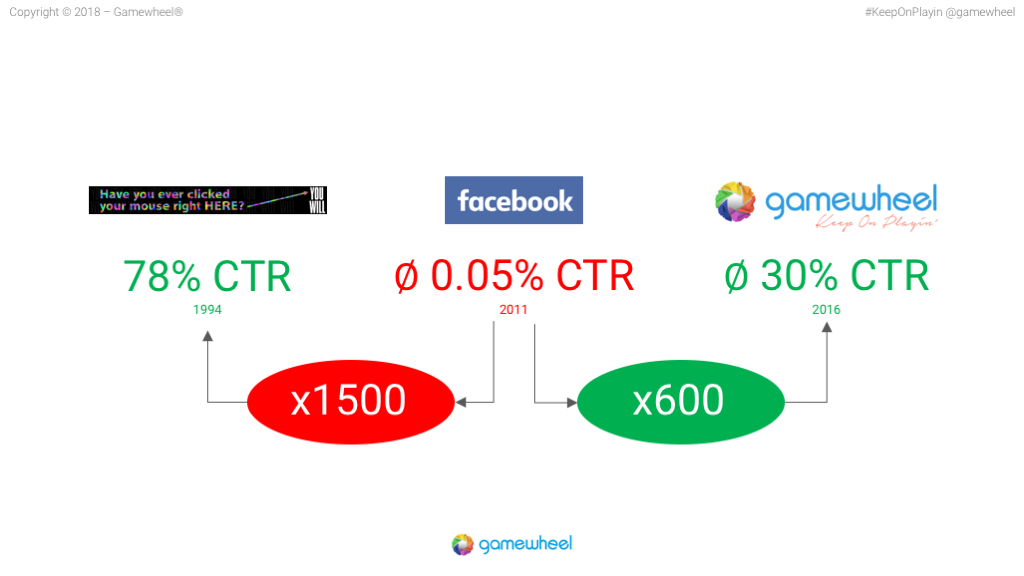 While doing this we had to work with several agencies at the same time and we spend a tremendous amount of time on setting, clarifying and aligning everything. And this is when we realized the actual issue we solved with Gamewheel, which was much bigger than just improving the CTRs.

After a while we started to distill the success factors into the stories… and we created a lot of stories, until one final realization dropped into place last year.

The core issue: Playable ads marketing is yet not well understood

The two most common misconceptions:

Where is the place for content marketing in this? Kind of in between creatives and performance, just adding some spice to everything, but actually nobody is willing to pay lots of money for high quality content. So let’s just consider content marketing as a cheaper version of brand marketing. Wait, this does not make sense at all.

Everyone just got it all wrong. Playable content marketing is not in between – it is an essential part of the end-to-end storytelling! 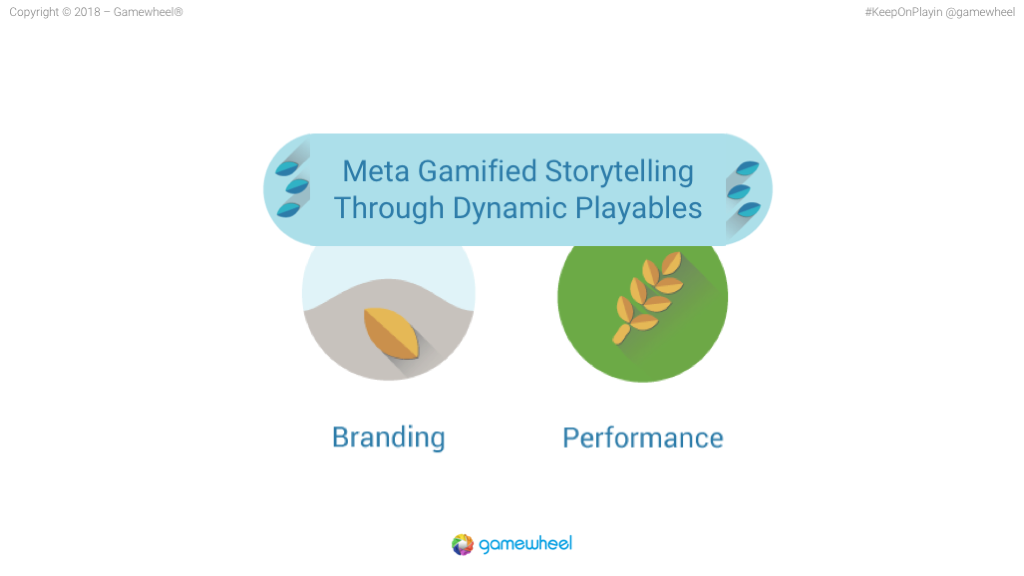 And as we did more and more campaigns we understood that not games and interactive engaging content is an issue, but the creative and media people are not working well together and tend to fight instead of collaborating.

Advertisers shall focus the efforts on synchronising the content and messages of Branding and Performance in an effective and measurable way through meta gamified storytelling.

How we solved it: by measuring & caring about every step of engagement

You remember the saying:

Half the money I spend on advertising is wasted; the trouble is I don’t know which half – Marketing Pioneer John Wanamaker (1838-1922)

Thus, nobody is really interested in revealing that what they do isn’t actually contributing that much value. But in times where everything can be measured, this is not the question anymore. There is no other way to be successful than to be working together end-to-end because of 3 trends:

As soon as we came to this realization, we started testing our Playable Ads on different types of programmatic media to interconnect creative & media work and interconnect branding & performance campaigns. We did many social media campaigns like the one for Hugendubel and then we discovered the scalability of Real-time-bidding (RTB) media on different mobile DSPs.

This discovery led to a complete reorganization of the company which was finished by end of 2017. After the reorganization we have partnered with the best game developers, specialized on building interactive creatives like Playbale ads, but also have a great understanding of media  and ad tech. We tested the compatibility of our Playables with several mobile DSPs and ad exchanges as announced in the recent blog post. In light of this, we’re very proud to announced the collaboration with AppLift and their mobile performance DSP DataLift 360 today.

Thus, if you ever feel a struggle to justify your marketing campaign or measure the effectiveness of your marketing strategy – we’re always happy to have a chat and share our advice based on the last 3+ years of experience where we have helped building content to power over 3000+ Playable campaigns.

Long awaited – Messeger Ads are there!

According to Facebook Blog, messenger ads will appear on the home tab in Messenger:

“When people tap an ad that appears in their Messenger home tab, they’re sent to the destination chosen during the ads creation. This destination can be your website, an app, or a Messenger conversation. Messenger ads are available for the Traffic, Conversions, App Install, Reach, Messages, and Brand Awareness objectives” –  read more on the Facebook blog on about how to set up the ads.

We’ve released the Cuuura story about how you could leverage Playable ads in messenger prior to Ads beeing available. Instead we run the story on the Kik messenger inside of the Chatbot. Read more about the success story here. In fact, now you could use exactly the same ad and run into inside of the Facebook Messenger.

How to run Playables in Messenger Ads?

Facebook does not offer you an option to create Playable ads (yet) but it’s not an issue. You can just use your regular Gamewheel Playable and add it into the Facebook Ad Manager by using regular Ad-to-Web campaigns.

This is the huge advantage of Gamewheel 2 technology that we’re fully relying on modern web JS stack and allow you to put up your Playables created in any channel possible from MRAID2 programmatic ad tech channels to chatbots and now Messenger Ads.

Read more about how you could set up a Facebook Playable ad campaign for the time feed oder messenger on our blog.

Please let us know if we can help you brining your Gamewheel campaign onto Facebook messenger. 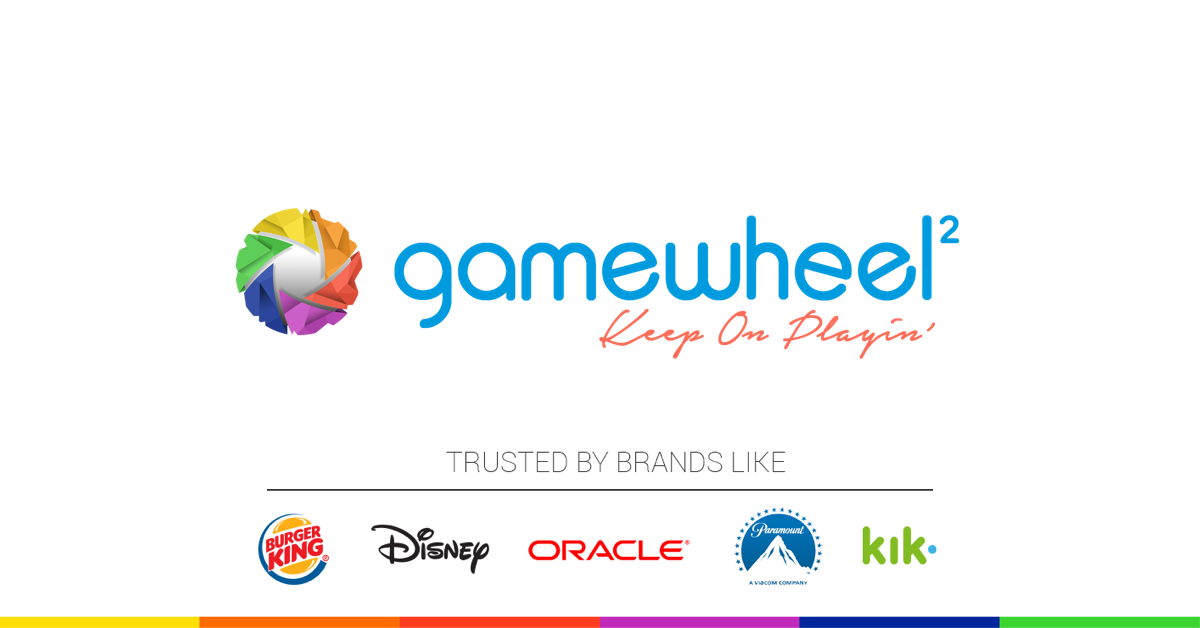 As you might know we had quite a “rollercoaster year” and now I’m finally ready to break the silence.

I’d like to thank you for staying with us since 2015 and for all your trust until now. It has been a huge pleasure being part of over 3000 super creative Playable campaigns. We have featured the best campaigns on our website in the success stories section, but trust me — it’s just a beginning and I hope that you’ll be part of our shared success story.

After a major restructuring of our team in summer, I have spent many hours revising our strategy going forward. Gamification and playables is still relatively new to most of advertisers and agencies and it’s rather hard for everyone to assess the risks and return on investment, thus the process of creating and launching a new campaign took regularly a while.

With Gamewheel we’re on a mission to become the leading Playables platform, providing measurable & premium interactive engagement. Thus, we have to reduce this complexity to democratize access to this premium format.

This is why we came up with a new simplified model, focused on a combination of three things in order to deliver best experience with highest engagement and maximal performance at lowest risk possible:

We have verified the new strategy with selected brands and trusted media partners and now, I’m happy to announce the launch of Gamewheel 2. We will extend offer offering by Playable media starting 2018 and will focus on Playables managed service first.

As of now we not only fully support the increasingly popular MRAID2 Playables format for programmatic media trading on interstitial and rewarded ad placements, but also provide managed service for Playable media buying and managed campaign service.

All this will allow us to provide all our customers and partners with a new simple model with guaranteed & measurable engagement where we take all the risk of creative content production and optimization and you just pay for the Plays (Cost-per-play, CPP).

Zero risk, one simple cost figure to agree, and tons of engagement guaranteed. How cool is this?

You already have a trusted media partner and prefer to work on a fix-price campaign budget? No problem at all! We’ll continue providing Playable MRAID2 tags, mini-games and gamification consulting or what have you. But to show our dedication to our mission we’ll also provide your with some recommendations for optimization based on experience, backed up by unique engagement data to ensure best end-to-end performance and maximize the ROAS and ad experience.

What does it exactly mean to you and all the existing content you have created? Please ensure you carefully read the following notes:

Enjoy your holidays and I can’t wait to hear your thoughts on our way forward and how we can help you reaching your goals in 2018 faster.

P.S. To reward you for reading such a long email in the best gamification fashion – here is a little Christmas surprise: our newest campaign we worked on with Disney and Facebook to promote the new Coco movie.  #KeepOnPlayin’ 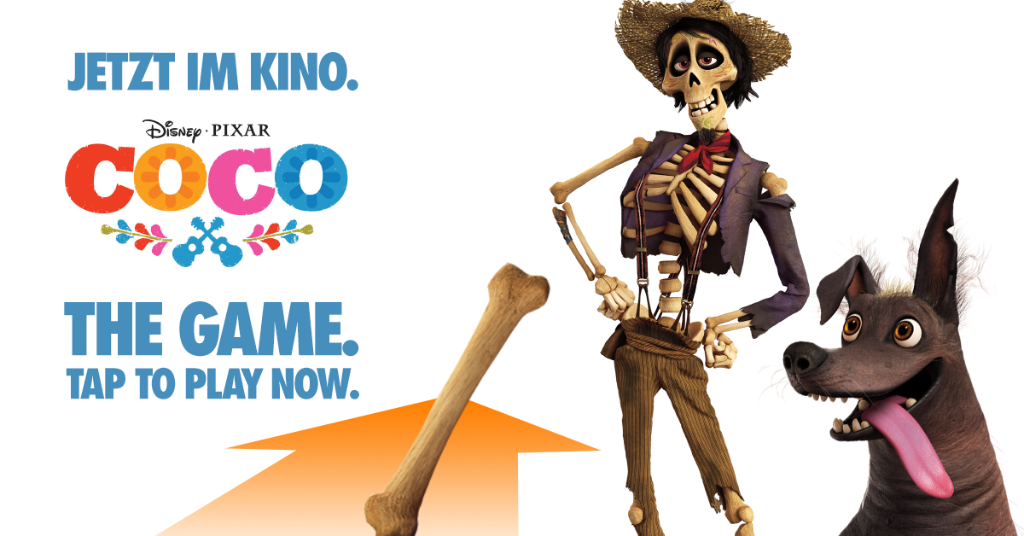 We are proud to present our latest Disney Coco Game campaign for the brand new Disney Pixar movie. The game is leveraging the basketball mechanics in a very creative way and offers a leaderboard where best players can win free tickets to the theaters in Germany.

The game was loved so much that UCI Kinos decided to embed it on their new website. Check it out!